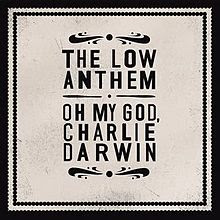 It has been a while since I posted an Americana album. Spoiler alert - you wont have to wait as long as the next one. I consider The Low Anthem to be Americana but Wiki has them down as indie folk.

Whatever. The copy of the album Oh, My God, Charlie Darwin, the band's second album from 2008 (and subsequently re-released in 2009) and on the Bella Union label is to replace the burn from the copy I took out from the record library when that was a thing.

It's abit of a mixed bag. Anyone hearing the pretty distinctive opener Charlie Darwin and expecting more of the same will end up disappointed.  Band member Ben Knox Miller describes the album as a  record about environmental decay and social de-evolution and the death of morality and all these very grand things. Whatever.

The other song I have selected To Ohio is very much Americana and puts me in mind of the Cash Brothers. No bad thing.

They are still on the go and have now released five albums. None of the others have crossed my radar as yet.

The Low Anthem - To Ohio