A Different Kind of Fix 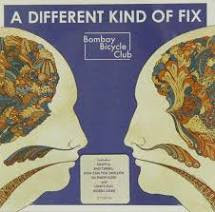 2021 Charity Shop Purchases 44 - Bombay Bicycle Club - A Different Kind of Fix
Just about the only downside of retirement is that I don't get an opportunity to catch up with new purchases on the commute. Having said that I don't miss the commute so I will need to get into a new routine whereby I dedicate some time to listen to new purchases.
Another one that would benefit from a further listen is A Different Kind of Fix the third album by Bombay Bicycle Club from 2011 on Island and the second of theirs purchased in Newton Stewart. It is also my final holiday purchase.
So far I think that I slightly prefer their debut which I featured the other day but I feel that this to has potential. Here are the first  two singles from the album the second of which is particularly good.
Bombay Bicycle Club - Shuffle
Bombay Bicycle Club - Lights Out, Words Gone
Posted by Charity Chic at 08:00