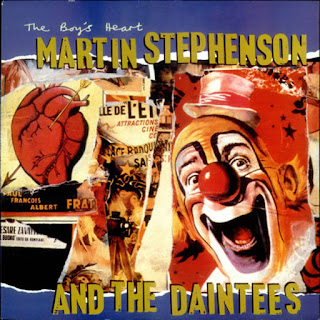 2021 Charity Shop Purchases 37 -Martin Stephenson & the Daintees  - The Boy's Heart
At first I was a bit put out when I  got home and I realised that this had cost me £7.99 as opposed to the £2.99 I thought. A trip to the opticians is clearly in order once lockdown allows.
Then I put it into perspective. That's about the price of a pint, Oxfam executives don't come cheap and it does have a picture of Boris Johnson on the cover.
From 1992 and on the Kitchenware label it is the 4th album by the band and joins its three predecessors on the shelves. After Boat to Bolivia the sales of the next three albums were disappointing leading to the band being dropped by the label after this one. The band was then disbanded with Martin pursuing a solo career with the Daintees subsequently reforming in 2000.
Martin has continued to enjoy a small but dedicated following and has relocated from the North East of England to the Highlands of Scotland. Other than seeing them at the Fleadh on Glasgow Green in the year this came out  I've not seen him/them live since something I clearly need to rectify.
Martin will be 60 later on this month, the day after me!
Martin Stephenson & the Daintees - Big Sky New Light
Martin Stephenson & the Daintees - We Can Roll
Posted by Charity Chic at 08:00