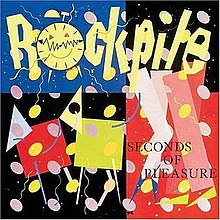 2021 Charity Shop Purchases 36 - Rockpile - Seconds of Pleasure
Hopefully some of you  in addition to Brian worked out that the album which included the bonus EP  of Nick Lowe and Dave Edmunds singing the Everly Brothers was none other that Seconds of Pleasure the only album by Rockpile which was released in October 1980 on.
Rockpile were Billy Bremner (guitar and vocals), Dave Edmunds (guitars,vocals, piano and organ), Nick Lowe (bass and vocals) and Terry Williams (drums).
They were about in the late 70s and early 80s playing a mix of pub rock and power pop.
They recorded enough material for 5 albums with three (Tracks on Wax 4, Repeat When Necessary and Twangin') being recorded as Dave Edmunds solo albums  and Labour of Lust as a Nick Lowe album. This was the only one recorded under the Rockpile name.
It seems only fair to give you a song with Nick Lowe as lead namely Teacher Teacher their only "hit" reacing number 51 on the US Billboard chart followed by Dave Edmunds leading on the Chuck Berry song Oh What a Thrill.
I'm pretty chuffed with this one
Rockpile - Teacher, Teacher
Rockpile -Oh What a Thrill
Posted by Charity Chic at 08:00