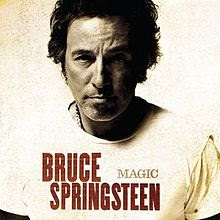 As one haul ends another one begins.

I took a trip to Some Great Reward a record/coffee shop on Glasgow's Victoria Road at the weekend where a couple of purchases were made. As they are relatively new records they will feature here in due course.

Springsteen haters (you know who who you are) are advised to look away now as I took the opportunity to upgrade some of his later albums from burns to CD. One such upgrade album was Magic his 15th studio album from 2007 and as always on the Columbia label.

It was his first with the E Street band since 2002's  The Rising and was ranked as number 2 on Rolling Stone's Top Fifty albums from 2007.It was reasonably well received by other critics.

I can't say it is one that I listen to all that often but it has some pretty good songs on it including the ridiculously catchy Girls in Their Summer Clothes.