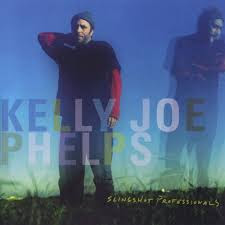 2021 Charity Shop Purchases 25  - Kelly Joe Phelps - Slingshot Professionals
The final CD from the Kingussie haul sees my trebling my Kelly Joe Phelps collection..From 2003 on the Rycodisc label Slingshot Professionals was his 6th studio album. Prior to picking up this and Roll Away the Stone  the only one of his I had was 2001's Sky Like a Broken Clock.
I'd heard the song Taylor John on the Paul Jones Rhythm and Blues show on Radio 2 which lead to me tracking it down.
Slingshot has a similar laid back vibe to Broken Clock and is less bluesy and gospely than Roll Away the Stone.
In the mid 2000s I went to see him at King Tuts. It was probably the wrong venue for him. It can get quite noisy there with the bar close to the stage so it was abit of a struggle for him to be heard.
I would like to see him in a more intimate venue which would do him nore justice.
Kelly Joe Phelps - Jericho
Kelly Joe Phelps - Slingshot Professionals
Posted by Charity Chic at 08:00