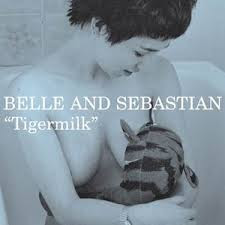 Over the last couple of years without really trying I have picked up a considerable chunk of Belle and Sebastian's back catalogue both albums and CD single/EPs in various charity shops.

This time round it is the turn of their 1996 debut Tigermilk originally on Electric Honey with subsequent re-releases on their own Jeepster label.

As I'm sure that many of you know Tigersmilk is the stuff of legend.Stuart Murdoch and Stuart David had enrolled in Glasgow's Stow College Beatbox programme for unemployed musicians under the tutorage of Alan Rankine of Associates fame. Tigermilk was recorded live over three days with a thousand vinyl copies on the College's Electric Honey label released. This interesting arcticle by Pitchfork  states that copies were selling for as much as £850 in 1999 .There is one for sale on Discogs at the moment for £550

Needless to say I didn't pick up a copy of the original or even any of the subsequent vinyl re-releases but the 1999 CD version which you can pick up for a couple of quid.

Belle and Sebastian - The State I Am In

Belle and Sebastian - We Rule the School