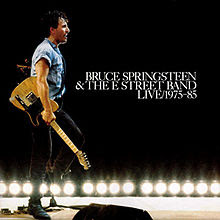 2021 Charity Shop Purchases 30 - Bruce Springsteen & the E Street Band Live 1975 -1985
Well I did warn you. It looks like someone had off loaded their Springsteen collection shortly before my visit to Barnandos and I naturally pounced to fill in some gaps in my collection.
My brother and I went to see Springsteen and the E Street Band  play at St James' Park, Newcastle on June 5th 1985. I think that  my brother threw a sickie. We got a bus from Battlefiled Rd in Glasgow and it soon became clear that any the the two of us were the only folk on the bus who knew any of his songs that were not on Born in the USA.
Live 1975- 1985 covers the Boss' best years and consists of 40 tracks recorded at various concerts over that period. Columbia Records released it as a 5 LP box set in November 1986 just in time for Christmas and my brother duly got the box set.
Sadly it was sold at some point in the intervening years so I didn't get to inherit it. I'm happy to make do with the 3 CD  version particulalry as in only cost me 3 quid.
We start with what is perhaps his greatest song live Rosalita (Come Out Tonight) recorded at the Roxy Theatre,West Hollywood, California on June 7th 1978.
This is followed by Racing in the Street from the Meadowland Arena, East Rutherford , New Jersey  from July 6th 1981.
Finally we have Bruce's version of what should be the US National Anthem Woodie Guthrie's This Land is Your Land from December 28th December 1980 from  the Nassau Coliseum, Uniondale, New York.
Feel free to loose yourself for half an hour.
Bruce Springsteen & the E Street Band - Rosalita (Come Out Tonight) (Live)
Bruce Springsteen & the E Street Band - Racing in the Street (Live)
Bruce Springsteen & the E Street Band - This Land is Your Land (Live)
Posted by Charity Chic at 08:00