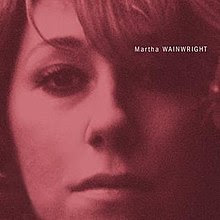 Coincidentally a few days after we returned from our trip up North Mrs CC came in with a few CDs one of which was Martha Wainwright  the 2005 album by  the Canadian/American singer/songwriter of the same name which was released on the DIS label in the UK.
She (Mrs CC) was unaware that I has  picked up an album by her old man as part of my Kingussie haul and which featured yesterday.
Yes, she is the daughter of Loudon Wainright III and Kate McGarrigle and the sister of Rufus.
I saw her and Rufus at the Glasgow Royal Concert Hall along with Kate and Anna McGarrigle on 28th May 2004 as my pal Big Tam had a spare ticket. Not surprisingly Loudon was not on the bill
I found Martha and Rufus pretty underwhelming but I did enjoy the McGarrigle Sisters.
Likewise I found most of the album pretty underwhelming. It is probably best known for featuring the song Bloody Motherf***ing Asshole which she has confirmed is about her dad.
Fortunately one of the bonus tracks on the album is Dis,Quand Reviendras-Tu?.
I think she would be better if she sang in French all the time!
Martha Wainwright - Who Was I Kidding?
Martha Wainwright - Dis, Quand Revienras- Tu?
Posted by Charity Chic at 08:00