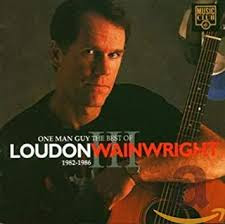 2021 Charity Shop Purchases 22  One Man Guy - The Best of Loudon Wainwright III1982 -1986
I'm not altogether sure as to why I picked this one up as I only  had one album by him a live one So Damn Happy which I picked up for a pound and rarely if ever play. I suppose it was maybe to see if this was an improvement. It is but only just and I'm not convinced that it will be a keeper.
From 1994 on Demon Records it contains tracks from 1983's Fame and Wealth (from which the second track below is taken), 1985's I'm All Right and 1986's More Love Songs (which includes the first song below).
There's something about him that I can't quite put me finger on. It's as if he's too smart for his own good. Also I feel that many of his songs are too autobiographical if that makes sense. Talk about washing your dirty linen in public. Little wonder that he appears to be estranged from the rest of his musical family.
Plus there is that annoying  American thing about adding numbers after your name although to give him some credit he didn't inflict the number IV on his son Rufus
Loudon Wainwright III - Your Mother and I
Loudon Wainwright III - Westchester County
Posted by Charity Chic at 08:00