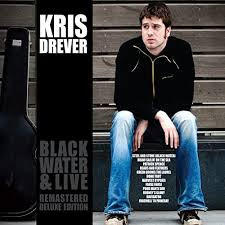 I'm a huge fan of Orkney folk singer Kris Drever and have all four of his solo albums, a mini album/EP  plus The Bell That Never Rang by Lau a trio that he is part of.

We have seen him on a number of occasions and he never fails to put on a good show. A great guitarist, fine singer and a good story teller to boot.

From 2006 on Reveal Records and produced by John McCusker, Black Water is his debut album. It contains 12 tracks all of which are good but for me there are three which are outstanding

Steel and Stone (Black Water ) the opening track is written by an Edinburgh folk singer Sandy Wright.He also does a terrific version of Boo Hewerdine's Harvest Gypsies . I won't post it today as it appeared relatively recently in a post about Boo

For me the pick of the bunch is Navigator a song by Phil Gaston. Again this has featured at least three  times here before.But worry not as my copy of the CD is  the remastered deluxe edition (released in 2012) and includes  a CD containing live versions of the songs from the album recorded  at Glasgow's Old Fruitmarket in January 2008 which I'm guessing was part of that year's  Celtic Connections