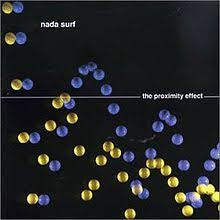 A trip to Clarkston Toll on the South Side of Glasgow led to a couple of purchases .Barnardos weren't stocking CDs any more. This is beginning to happen in other shops and they may go the same way as videos. Shelter has nothing decent. Oxfam were charging £2.49 per CD which I would only pay if it was something I was really after. Fortunately Cancer Research yielded some low hanging fruit.

The Proximity Effect is the 2nd album by New York band Nada Surf and joins their 3rd album Let's Go on the shelves.. They had been droppoed by their label Elektra but it was released by them in Europe in 1998 prior to being self released by the band in the US by MarDev in 2000..My copy is from Heavenly/EMI from  2002 so it must be a re-release on the back of the success of Let's Go

Pitchfork makes comparisons to the Foo Fighters and Weezer. I'm not sure that I know enough about either band to comment but it does have a slightly grungy feel to it in places. Not as good as Let's Go but still a keeper.