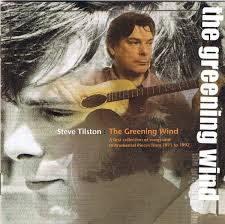 He featured the likes of Martin Carthy, Martin Simpson, Fairport Convention and Richard & Linda Thompson on a regular basis. He also often played the brilliant The Slip Jigs & Reels by Steve Tilson

This in turn led me seeking out the album The Greening Wind a collection of songs and instrumental pieces from 1971-1992 (Hubris Records,1999). In  truth there is nothing else that comes close to Slip Jigs but it is worth having for that song alone.

Slip Jigs & Reels was written in 1988 inspired by a photograph he saw in a book about the American West. It was of a young man and his mule. Steve could not remember the name of the man but the mule was called Evil Murdoch. The man was killed by Mescalero Apaches a few hours after the photo was taken. No details about what happened to the mule.