The Hissing of Summer Lawns 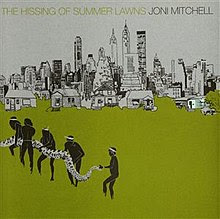 2021 Charity Shop Purchases 19 - Joni Mitchell - The Hissing of Summer Lawns
A few years ago I picked up a Box Set from the Library (when they were actually open and still did that sort of thing) containing the first ten Joni Mitchell albums. They were duly copied.
Since than we have been gradually upgrading when charity purchases allow.
The latest acquisition is her seventh album The Hissing of Summer Lawns an album from 1975 on the Asylum label. Only Song to a Seagull , Hejira, Don Juan's Wreckless Daughters and Coart and Spark to go.
An album which was released to mixed reviews its reputation has gradually improved over the years although I would maybe not go as far as music writer Howard Sounes who feels that it is her masterpiece and who compares it to Blood on the Tracks.
Jason Akeny from Allmusic feels that it is an an adventurous work that remains among her most difficult records which has a strange and beautiful fusion of jazz and shimmering avant pop.
Joni Mitchell -In France They Kiss on Main Street
Joni Mitchell - The Hissing of Summer Lawns
Posted by Charity Chic at 08:00