The Madness of Happiness 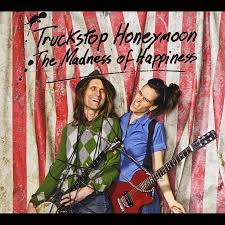 2021 Charity Shop Purchases 18 - Truckstop Honeymoon - The Madness of Happiness.
This was my first Americana charity shop acquisiton of the year and was a total punt, An act that I had absolutely no knowledge of but let's face it who wouldn't take a chance on a band with the name like  Truckstop Honeymoon.
By way of introduction here is some blurb from their website
Hollering with all their hearts over a five string banjo and a doghouse bass, Truckstop Honeymoon live the life they sing about. Touring across three continents with four kids and a truck load of songs, Katie and Mike West tell stories about the strangeness of everyday life. Their music combines elements of bluegrass, music hall jazz, and straight up rock’n’roll. They have released nine albums and a full length documentary film, produced over two hundred albums for other artist, and received awards for Lifetime Achievement in the Arts.
From 2014  on the Squirrel label The Madness of Happiness is the 8th of the 9

A review in Folk Radio tells us that Mike West used to be the front man of Manchester band Man From Delmonte and that he was half of an act called Redneck Riviera. The review also says that

Sharing lead between them as well as duetting, he now sounds like a young Willie Nelson, but with a seasoned chewing tobacco quality to the voice, while she has the sort of high Partonish twang you’d expect from a North Carolina girl. As well as both playing guitar, he handles banjo and mandolin while she takes care of upright bass and piano

The album is good fun and a lot better than I thought it would be. I imagine that they would put on a good show.50p well spent.