I Ain't Marching Any More 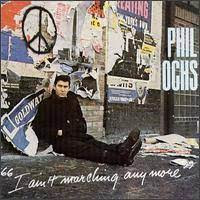 There was a time in the early 60s when Folk music was pretty much synonymous with protest songs particularly in the States.

This was around the time when Dylan first shot to prominence with songs such as The Times They Are a Changing and With God on Our Side. Another exponent was Phil Ochs although he preferred to by known as a Topical Singer. At the time there was plenty to get topical about.

I Ain't Marching Any More is his second album from 1965 on the Electra label. I have it on a two albums on one CD format along with his 1964 debut All The News That's Fit to Sing.

A number of his songs appeared on George's State of the Union series including one from this album namely Here's to the State of Mississippi which must be one of the most powerful songs that I've ever heard. I don't imagine that he got a warm welcome in that state following that.

We could do with more protest songs now. Although Edwyn Collins spoke of too many protest singers, not enough protest songs it is hard to think of many with the notable exceptions of Steve Earle and Billy Bragg

Phil Ochs - Here's to the State of Mississippi