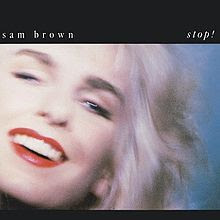 2021 Charity Shop Purchases 14 - Sam Brown -Stop1
Sam Brown first came to my attention with a song called I Forgive You which I had on a Demon Records compilation which completely blew me away and which I featured back in January 2014
I subsequently picked up the CD of her best selling  1988 album Stop! on the A&M label. I thought it would have appeared here before but apparantly not.
Then on my recent Clarkston trip I saw a vinyl copy for a pound which was a bit of a no brainer.
The plan was to replace the CD with the vinyl but the CD has 3 bonus tracks - Can I Get a Witness, High as a Kite and Nutbush City Limits so it is staying meantime.They may well feature as a post somewhere further down the line.
She has a great Blue Eyed Soul voice which can belt out a tune either as a cover or one of her own  compositions. Here are two of her own from Stop! and the aforementioned I Forgive You
Sam Brown - Walking Back to Me
Sam Brown - Stop!
Sam Brown - I Forgive You
Posted by Charity Chic at 08:00