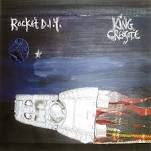 2021 Charity Shop Purchases 17 - King Creosote - Rocket D.I.Y
It is a rare and always a pleasant experience to stumble across something by King Creosote in a charity shop.Of the seven albums I now have by him it is only the second charity shop purchase after Bombshell.From 2005 it is also the oldest one of his that I have and the first on the  influential Fence label.
Critically well received to the extent that The Skinny magazine ranked it as the 17th best Scottish album of the decade.
Recorded in Crail mostly during school hours and after 9pm
On Twin Tub Twin Kenny  must be the first artist to use the build of of laudry as a methapor for romantic entaglements.
Of the many things featured in A Month of Firsts the referencing of the East Neuk of Fife fishing village Pittenweem in a song stands out
King Creosote - Twin Tub
King Creosote - A Month of Firsts
Posted by Charity Chic at 08:00