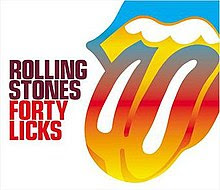 2021 Charity Shop Purchases 4 - The Rolling Stones - Forty Licks
Forty Licks is a 2 x CD 40 year career-spanning retrospective compilation of the work of The Rolling Stones released in 2002. For licensing reasons it was attributed to Virgin/ABCKO/Decca.
Bought primarily to replace a burn but let's face it not too many would turn down the opportunity to pick up 40 songs by the Stones for a quid.
Whereas it is not strictly in chronilogical order disc 1 contains songs from 1964 -1971 and disc 2 from 1971 to 2002.
Two from each disc I think.
From disc 1 I'm going for Gimme Shelter from the great Let it Bleed album from1969 and the single version of She's a Rainbow a song from1967's Their Satanic Majesties Request.
You won't be surprised to hear that disc 2 is not as consistantly brilliant as disc 1 although a couple of songs from  Exile on Main Street are  included. (Sticky Fingers straddles both discs)
Beast of Burden is taken from Some Girls  from 1978 probably their best post 1972 album.
The compilation includes four new songs. No great shakes but Keys to Your Love is probably the best of a fairly mediocre bunch.
Rolling Stones - Gimme Shelter
Rolling Stones - She's a Rainbow
Rolling Stones - Beast of Burden
Rolling Stones - Keys to Your Love
Posted by Charity Chic at 08:00