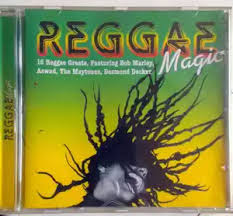 It's a wee while since we have had any reggae on here so let's rectify that.

It is always a bit of a hit or a miss when you pick up a cheap and cheerful reggae compilation. They can be very poor with lesser known songs from lesser known artists or very good.

Reggae Magic a 2004 compilation from Musicbank is probably somewhere in the middle. There are certainly some well known artists - Bob Marley, The Maytals, Aswad, Boris Gardner and Desmond Dekker as well as those listed below.

I can't say that I  recognised any of the songs but that is probably just me.

Annoyingly there is a bit of a disconnect with the track details listed on the CD and where they tracks actually are . For instance the CD claims that track 5 is Cool You Up whereas Cool You Up is track 6  and not What's On Your Mind by The Maytals which may be the information coming up on your screen. This happens throughout the CD so apologies in advance for any confusion.

The Maytones - Cool You Up

Sly and Robbie - Tonight is the Night