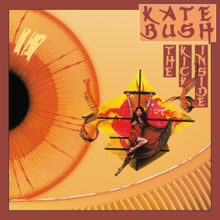 2021 Charity Shop Purchases 3  Kate Bush - The Kick Inside
There were about half a dozen Kate Bush CDs in the charity shop where I had my May Day foray .I'm not an uber fan nor am I one of those people who can't stand her.This led me to picking up only two of them.
One was her debut album from 1976 (when she was just 19 if my arithmetic is correct) The Kick Inside  on EMI in the UK and Harvest in the States
You will all be aware of the main single from the album Wuthering Heights which amazingly was the first self written song by a female artist to reach number 1 on the UK singles charts. I shall spare you that one today
Them Heavy People released on 5th May 1978 was a single in Japan only with the title Rolling the Ball
Kate was only 13 when she wrote The Man With The Child in His Eyes which is pretty astonishing. She recorded it when she was 16.
The more astute among you and/or those who can remember as far back as the first paragraph will have worked out that she will be making a further appearance here sooner rather than later.
Kate Bush -Them Heavy People
Kate Bush - The Man with the Child in His Eyes
Posted by Charity Chic at 08:00