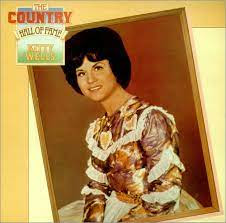 The second oustanding Vintage Country Vinyl album, bought at the same time as Melba Montgomery and considerably better, is Kitty Wells as part of The Country Hall of Fame series on MCA Coral from 1990.

16 tracks, and not a duffer amongst them, from the lady who broke down the barrier to women in Country music with her 1952 classic It Wasn't God Who Made Honky Tonk Angels.

I would imagine that you are all familiar with that one so I thought I would share two of the others. Paying for that Back Street Affair is an answer song to Back Street Affair the 1952 hit by Webb Pierce.It reached number 6 in the US Country charts in 1953.

Mommy for a Day is song written by Kitty and in true country style it is a bit of a heartbreaker. It was a top 5 hit in 1959.

13 quid from the  Tax Dodgers if you are interested. I payed 99p

Kitty Wells -Paying For That Back Street Affair

Kitty Wells - Mommy for a Day