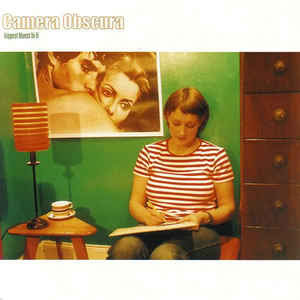 Right, where were we before we were so rudely interupted?

Ah, yes nearing the end of the first haul of the year. We had got as far as number 8 so logic disctates that this must be number 9.

I'm not sure which I 'm most chuffed with the Bob Dylan Witmark Demos Bootleg or Biggest Blue Hi-Fi the 2002 debut album by Camera Obscura on the Elefant label. Given the Elefant Records are from Madrid the CD came with an outer sleeve with all the tracks written in Spanish which confused me somewhat. I normally dispose of the outer sleeves as I find them a bit of a nuisance but I'm keeping this one.

There are obvious comparisons with Belle and Sebastian particularly given that the album was produced by Stuart Murdoch. However I would argue that unlike B&S  the quality has not diminished over the years . Indeed they have probably got better. I saw them for the first time in St Lukes in Glasgow in August 2019 and they were absolutely fantastic.

Only five albums to date but hopefully they will be back in the studio soon. I only need Underachievers Please Try Harder to complete the set.There's a message in there somewhere.