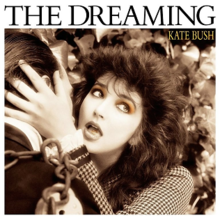 The final offering from the first charity haul of 2021 and the second by Kate Bush is her 4th album The Dreaming from 1982 on the EMI label.

There were a few available but I opted for this one and her debut The Kick Inside. They could not be more different.

It was almost two years in the making and met with a mixed critical reception given that is was most probaly her uncommercial and experimental release. I must admit it took me completely by surprise. I suspect that it will take a few listens before I can get my head around it. The critic from Melody Maker wrote that it's the sort of album that makes me want to kidnap the artist and demand the explanation behind each track".

The critical standing gradually improved over the years as folk began to get their heads around it including featuring in the 1001 Albums You Must Hear Before You Die (I've now ticked that box) and Mojo's Top 50 Eccentric Albums of All Time. Apparently Bjork is a fan which is hardly surpriing.

I'm off for another listen.

Kate Bush - Sat On Your Lap