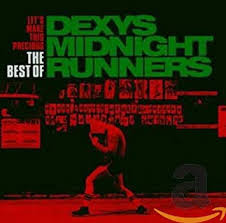 2021 Charity Shop Purchases 8 Dexy's Midnight Runners - Let's Make This Precious
A post in a similar vein to yesterday's one on Big Country albeit with much better sound quality.
I had Searching for the Young Soul Rebels and Too-Rye-Aye by Dexy's Midnight Runners on vinyl but nothing on CD.
So even although about half the 18 songs from Let's Make This Precious - The Best of Dexy's Midnight Runners a 2003 compilation on EMI come from these two albums I could justify picking it up for a pound.
Unlike Big Country I'm featuring two that I don't have on vinyl. Because of You was a single from 1986 and was the theme song from the British sitcom Brushstrokes. It was obviously the best thing about the programme.
Let's Get This Straight (From the Start) was a non-album single from 1982 with Old from Too-Rye- Aye on the b-side.
Worth the purchase for these two tracks alone.
Dexys Midnight Runners - Because of You
Dexys Midnight Runners -Lets Get This Straight (From the Start)
Posted by Charity Chic at 08:00