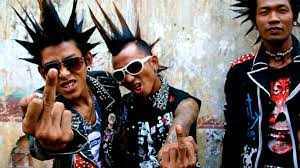 Generation X debuted here earlier in this series in March with Dancing With Myself from the Sounds of the City album. Here they sing of their love for Cathy McGowan  with the excellent Ready Steady Go

Eddie and the Hot Rods also debuted on that album. Here they are experiencing some Teenage Depression

I know someone who when he had 998 albums he went out and bought a 999 album and then a Fall album for his 1000th. You won't get any of that nonsense here but you will get 999 making their debut with Homicide.

The Lurkers are another band who until now had not graced these pages. They have now even though they Ain't Got a Clue.

Time to bail out before the barrel gets scraped further.

The Lurkers -Ain't Got a Clue