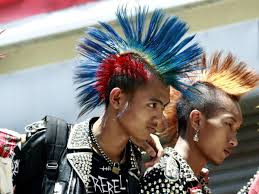 As this series of punk/new wave compilations continues it is getting harder and harder to come up with artists or songs which I haven't featured before. To make things even harder I'm trying to exercise a bit of quality control so no Throbbing Gristle today.

First up is the only debut act today .The Dead Boys were a band from Cleveland, Ohio and according to Wiki they were one of the rowdiest and most violent punk groups of the era which might explain why they didn't last long or enjoy more fame. Sonic Reducer was their debut single on the Sire label in 1977.

Public Image Ltd surely need no introduction. The band that Johnny Rotten now using his real name John Lydon formed when he left the Sex Pistols. I thought this had featured before but looking back only Rise has appeared before.

The Ruts debuted earler on these Saturday slots with Staring at the Rude Boys which was on the Sound of the City compilation .Babylon's Burning is the one I remember most.

Sod it - I'm about to break my own rules for this series. Ambition by Vic Goddard & the Subway Sect was all set to appear until I discovered that it had featured on a random Uncut compilation. It is so good that it is going on again.