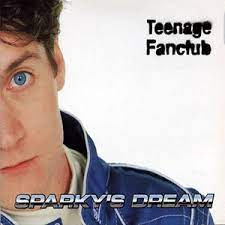 Sparky's Dream a song written by Gerry Love is the 2nd track on Teenage Fanclub's 1994 album Grand Prix (Creation) and was also the 2nd single  from the album released on 22nd May 1995.

I already have it from the album on vinyl. CD and digitally but if I see a Teenage Fanclub single I'm going to pick it up if only to support Brian's campaign for the release of a B-sides album.

As is the way of these things there appears to be a number of different versions. The one that I acquired seems to be a promo version. It contains 4 tracks - Sparky's Dream (obviously), Burned (a Buffalo Springfield song by Neil Young ), For You (written by Raymond McGinley) and Headstand another Gerry Love number.

Yours for £2.50 plus postage  on Discogs

Teenage Fanclub - For You