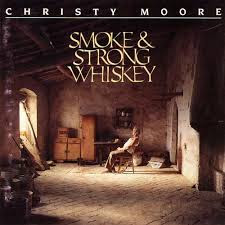 We have featured Scottish and English folk music here in recent weeks so it is maybe time to cross the water to Ireland.
Mrs CC came in the other week with a few charity CDs one of which  was from the land of her birth.
From 1991 on the Newberry label Smoke & Strong Whiskey is an album by Irish singer ,songwriter and guitarist Christy Moore. We will forgive his spelling of the amber nectar
He is well known for his politics and social commentary which respects a left wing nationalist perspective. I was intrigued by the song Whacker Humphries and suspected that it might well be a true story. And so it proved . Good to see folk singers tackling modern isses
The second song is more traditional in nature and reflects the lot of a jobbing Irish folk singer.
Christy Moore - Whacker Humphries
Christy Moore - Encore
Posted by Charity Chic at 08:00