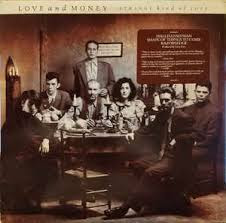 Mrs CC came in the other day with a number of CDs all of which were better than Soft Machine. Strange to believe but there you go.

One which is particularly good is Strange Kind of Love the second album from Glasgow legends Love and Money from 1988 on the Fontana label. There is a vinyl version of this on the shelves which again I think is down to Mrs CC.

The only other thing of theirs I have is a charity find Cheap Pearls and Whisky Dreams which is a Best Of  and which includes 5 songs from this album including the 2 below.

At the time Love and Money were James Grant, Paul McGeechan, Bobby Paterson with Jeff Porcaro from Toto on drums. It was produced by Steely Dan's producer Gary Katz with an uncedited appearance by Donald Fagan.

Halleluiah Man was their first hit single with Jocelyn Square being a particular favourite of mine.

I suspect a few of you will enjoy this trip down memory lane.