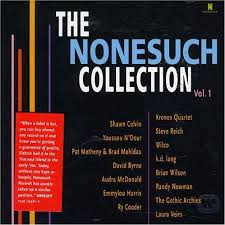 The second last CD from my Victoria Road haul is a compilation The Nonesuch Collection from 2006 and not surprisingly on the Nonesuch label.

The red stickery bit  reads when a label is hot you can buy almost any record on it and you know you're getting a guarantee of quality.Elektra had it in the '60s and Island in the early '70s. Today without any hypee or hoopla, Nonesuch records has quietly taken up a similar position.

Hmm I can think of others more worthy of that accolade and I'm sure you can too.

Having said that I was quite surprised when I did a search to find how many albums from the label that I actually have.

It's quite an eclectic mix with a bit too much jazzy stuff for my liking. I've gone for These Four Walls by Shawn Colvin from her album of the same name and Here I Am by Emmylou Harris from her 2003 album Stumble Into Grace one I  acquired and posted here in November 2020 but without sharing this song

Emmylou Harris - Here I Am

Wilco -Shot in the Arm