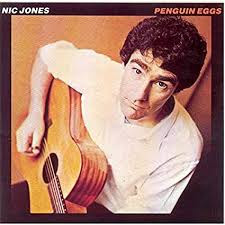 You can't have a Monday Folk Music series and not include Penguin Eggs the fifth and final studio album by Nic Jones from 1980 on the Topic label one of the go to labels for folk.

Penguin Eggs was voted the 2nd best folk album of all time on the BBC Radio 2 Mike Harding Folk Show - second only to Fairport Convention's Liege and Leaf.. It was also Melody Maker's folk album of the year in 1980 and was his last album as sadly a car crash in 1982 greatly  restricted his ability to perform.

While not quite a concept album there is very much a nautical feel to many of the songs and it is pretty traditional in nature even although  he puts his own stamp on them.

Allmusic has described the album as one of those rare records where not just every song, but each instrumental part is worth hearing

They are right there.

Nic Jones - Farewell to the Gold