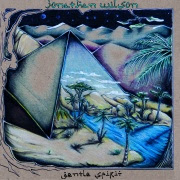 2021 Charity Shop Purchases 42 - Jonathan Wilson - Gentle Spirit
I picked up Gentle Spirit  by Jonathan Wilson in a charity shop in Newton Stewart  thinking that it was a CD single. It is in fact his first official studio from 2011 on the Bella Union label.
It was critically well received with Uncut crowning him as the new king of Laurel Canyon  while Kathleen Johnson of Vintage Guitar described the album as a hippie-soul drenched 80 minutes of folk-psych-rock goodness
There is certainly a bit of a hippy dippy vibe to it but I can also see shades of Gene Clark and The Byrds here and there. I do like his latest album Dixie Blur and the tracks I've heard from the one before that  Rare Birds
He also performed at the Celtic Connections Roaming Roots Review  tribute concert commemorating Bruce Springsteen's 70th birthday and came across as a good guy.
What with this and Rose City Band I'm in danger of growing my hair long and acquiring some beads
Jonathan Wilson - Canyon in the Rain
Jonathan Wilson - Ballad of the Pines
Posted by Charity Chic at 08:00