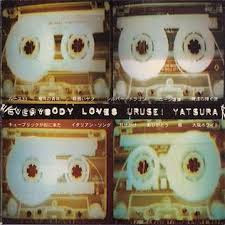 2021 Charity Shop Purchases 48  -Urusei Yatsura - Everyone Loves Urusei Yatsura
In addition to the CD single Hello Tiger which I featured a few days ago to widespread indifference I also came away from Oxfam with Everyone Loves Urusei Yatsura the third and final album by the Glasgow band which was released in 2000 on Oni Records
A brief bio of the band is included in the link above so I wont bore you with repeting it again. I found an intersting article from Drowned in Sound which states that Everybody loves Urusei Yatsura, is a far more low key and less immediate affair, and anyone expecting the rock n roll explosion of hits like Hello Tiger will be severely disappointed, but those who dug Yatsura’s lyrics and style in the past will find getting into the new album a thoroughly rewarding experience.
The only real signs of the Yatsura of old are the obvious single Louche 33 and the fuzztastic Silver Dragon, and while the rest of the album is still far from quiet, the killer guitars are somehow more muted than they used to be, and more emphasis is placed on increasingly subtle song structure and above all, the lyrics.

I'd already lined up Louche 33 (a title The Fall would be proud of) as one of my selections but have now added Silver Dragon as anything described as fuzzstastic is obviously worth a listen. Far from quiet is also fine by me.