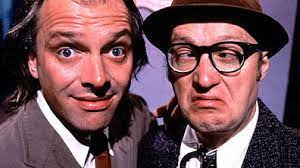 A shotout to our dear friend Ernie Goggins who appears to have found himself at the bottom of my sidebar Blog list.

Blogger has been playing silly buggers recently. The other day I was unable to read about half a dozen blogs as gobbledygook appeared. I know, I know, but I actually could tell the difference.

Thankfully it looks as though things have sorted themselves out with the exception of poor Ernie. The sidebar is supposed to show the most recent posts first .It seems to be doing that -apart from Ernie who now finds himself languishing behind retirees such as Brian and Drew.

I deleted them all and started again  tidying it up a little, but he's still there. If I have missed anyone out please give me a  shout.

Keep scrolling down folks, it will be worth it!

James King & the Lonewolves -Bottom of the Sea

Nothing to see here for a couple of weeks as we are off to recharge our batteries and hit the Highlands charity shops. Yes Rol another holiday!