Psychedelic Americana - it's my new thing.

On the back of the Manchester Psych Fest on Saturday a few of the stragglers made it as far as Glasgow on the Sunday night.

The basement of Broadcast, a bar in Sauchiehall Street to be precise, which was a new venue for me. I caught the last song by Noon Garden and then the full set by Japanese Television who were very loud but surprisingly melodic.

Then it was the main act who I had specifically come to see.I have featured Rose City Band on here on a couple of occasions and make no apology for doing so again

To quote their label while describing their third album Earth Trip they produce songs with a country-rock twang and a melancholic, wistful undertone. Themes recur such as pining for summers spent in the company of friends to newer meditations on space, stillness and the splendor of the natural world. Johnson’s laid-back and classically West Coast songs communicate emotions entirely of the moment with both his lyrics, intimate vocal style as well as his elegant elongated guitar lines and astute use of counter-melodies on the pedal steel.

Not only elegant elongated guitar lines and pedal steel but some fantastic piano as well .They were absolutely fantastic. My gig of the year so far by a country mile.

Hopefully fellow Psychedelic Americana act London's The Hanging Stars can give them a run for their money when I see  them towards the end of October.

I shall leave you with a picture of Ripley who is so cool that he can effortlessly pull off a footwear combination of one green Croc and one sandle and sock.You've either go it or you haven't and Ripley has in spades. 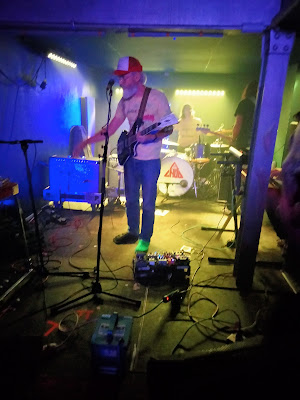