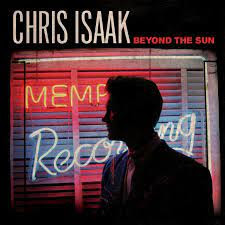 2022 Charity Shop Purchases #49 - Chris Isaak - Beyond the Sun
Beyond the Sun was Chris Isaak's 11th studio album and was released in the States on 18th October 2011 on the Vanguard label.
The copy I picked up is a promo advising that the record would be released on 23rd January 2012 in the UK on Rhino/Wicked Game Records
As is the way of promos it comes with some blurb on this occasion courtesy of NoBul promotions. It starts with the sentence the late Sam Philips. the visionary that paved the way for modern music, named Chris Isaak as the artist he most wanted to record with. Did he, aye? as they say round these parts
The majority of the album was recorded at the legendary Sun Studio in Memphis and features his versions of tracks made famous by the likes of Elvis, Johnny Cash, Roy Orbison, Carl Perkins and Jerry Lee Lewis. In my opinion he makes a pretty good job of it. It also goes someway to explaining the title of the album.
For some reason my burning software would not burn any of the tracks. Worry not however as I have managed to obtain them via nefarious means
Chris Isaak - Dixie Fried
Chris Isaak - I Forgot to Remeber to Forget
Chris Isaak - Oh, Pretty Woman
Posted by Charity Chic at 08:00