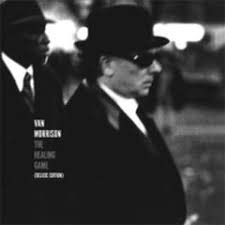 There is no doubt that the Grumpy Irishman is as mad as a box of frogs and not a particularly pleasant individual.

However it cannot be denied that he has come up with some great records over the years and I will always pick any up if I see them cheap in Charity Shops.

I wouldn't say that The Healing Game his 26th album released in 1997 on the Polydor label is necessarily one of his better ones but it is still worth the 75p that I paid for it and it will be joining the others on the shelves.

It is a bit of a mixture of Celtic folk and jazz - I hope that has not put you off too much. There are no particularly stand out tracks. I've gone for the opening number Rough God Goes Riding which according to Wiki is one of the standout tracks from his six album reissue series (here)

My other selection is Waiting Game which has backing vocals by Brian Kennedy and Katie Kissoon. Yes THAT Katie Kissoon!