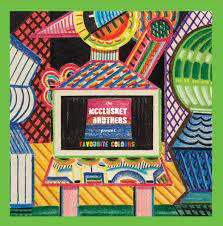 A few days ago Khahem posted a tribute to the actress Gwyneth Powell who sadly died recently. She was probably best known for playing Mrs McCluskey the head mistress in Grange Hill. He accompanied his post with a mix of songs in bands which featured a McClusky or McCluskey.

This included the Bluebells who of course include Ken and David McCluskey among their members.I commented that the McCluskey Brothers have also recorded a few albums in their own right.

In the early days of this blog, as far back as 2014, I posted a piece on their third album 1996's Wonderful Affair.

Aware of All was their debut in 1986 on Thrush Records. Their second record Favourite Colours was released on CD only by Kingfisher Records in 1992. Last year saw it's first vinyl release on Past Nights from Glasgow the LNFG sub label which lovingly release some old favourites as part of a historical archive of all things past but not necessarily Glasgow.

It is well worth acquiring.

Tne McCluskey Brothers -She Said to the Driver