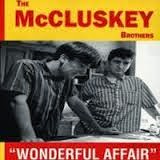 Another recent Charity shop purchase is Wonderful Affair a 1996 record on Line Records by The McCluskey Brothers.
For some reason my burning software has recognised this as their 1986 album Aware of All so apologies if the wrong song titles come up.
Ken and David McCluskey were in the Bluebells prior to going off on their own and according to Linn Records for whom they later recorded they produced "perfect pop....Marrying choppy guitar sounds and Celtic soulfulness, these siblings have a unique and intuitive understanding of melody, harmony and rhythm."
You can't really argue with that.
Not to be confused with Peel favourites mcclusky or fellow Scots and X factor contenders The MacDonald Brothers
I had a temporary panic  that I may have accidentally purchased the latter by mistake but thankfully not.

The McCluskey Brothers - Release Me

The McCluskey Brothers - Pale Horizon
Posted by Charity Chic at 08:00