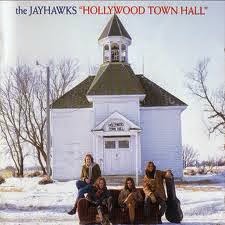 It took my ages to getting round to posting The Jayhawks but now the buggers are popping up on CCM with alarming regularity.
The excuse for today's posting is to pay homage to Hollywood Town Hall one of the top 10 albums of all time.
Released in 1992 on Def American it was their third album and their first release on a major label and the one that shot them to prominence.
Ten tracks and every one a cracker.it includes two songs Two Angels and Martin's Song which had appeared on their previous album 1989's Blue Earth on the Twin/Tone label.
The band hailed from Minneapolis and on this album there is the classic line up of Marc Olson on Vocals, Acoustic Guitar and harmonica, Gary Louris on vocals and electric guitar, Marc Perlman on bass and Ken Callahan on drums.
The line up changed many times over the years with usually at least two out of the three of Olson, Louris and Perlman involved.
All songs by Olson and Louris and production by George Drakoulias.
The cover picture is from Hollywood Township, Carver County , Minnesota
They went on to record a further 5 studio albums all invariably excellent but Hollywood Town Hall was the one that  first brought them to my attention and it  still remains my firm  favourite to this day.

The Jayhawks - Crowded in the Wings

The Jayhawks - Take Me With You (When You Go)
Posted by Charity Chic at 08:00