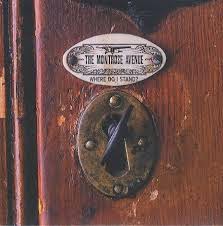 The Montrose Avenue do not come from the town of Montrose situated on the East Cost of Scotland approximately halfway between Aberdeen and Dundee.
Nor do they have anything to do with the godawful American hard rock band Montrose who shall never darken the door of CCM.
No, they were a five piece  rock/country band from Wokingham in Berkshire consisting of lead singer and guitarist Robert Lindsey-Clark, pianist and vocalist Scott James,vocalist and guitarist Paul Williams,bassist James Taylor and drummer Matt Everitt
I went to see them on February 27th 1998 at King Tuts no doubt largely because of the hype:

Country rockers The Montrose Avenue are being hotly tipped for stardom after the release of only their second single Where Do I Stand?
Music industry experts are already comparing them to bands such as REM and The Byrds.
At King Tut's on Wednesday night, the five fresh-faced lads proved they've got what it takes to get to the top and that there are no dead-ends on this Montrose Avenue . The Daily Record

Needless to say that didn't happen.They released one album Thirty Days Out and Where Do I Stand was their biggest hit peaking at number 38 in the UK charts.
I've just listened to it for the first time in ages and it's not bad at all.
You are getting tracks 1 and 3 with every likelihood that tracks 2 and 4 will feature at some juncture in the future.

The Montrose Avenue - Where Do I Stand?

My worse viewing figures for  a while yesterday. I can only assume that the words Pointer Sisters and Country in the same sentence are an anathema to many
Posted by Charity Chic at 08:00