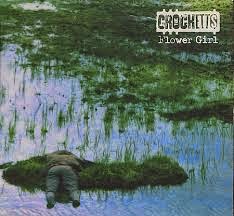 I have absolutely no idea as to how, when or why Flower Girl a 1998 single by The Crocketts found its way into my collection.
Perhaps I heard it on the radio or perhaps I saw them in concert, presumably supporting someone else. Who knows.
I do know that it is almost certainly the first time this millennium that it has had an airing
The Crocketts were Welsh and had two albums on V2  We May be Skinny and Wiry from 1998 from which presumably this song was taken and The Great Brain Robbery from 2000.
They disbanded in 2002 with two members going on to form The Crimea.
And that's about it.

The Crocketts - Mrs Donnelly
Posted by Charity Chic at 08:00