A Date With Destiny? 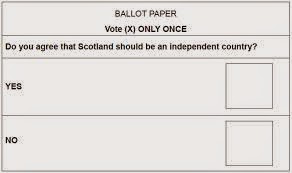 So finally the day is here. Probably the most important day in Scottish history for over 300 years.
After much soul searching I have decided to vote yes.
Originally it wasn't an easy decision as I see myself as left leaning and someone more comfortable voting Labour that nationalist.
However, I feel I have made the right choice for a variety of reasons.
The UK is lurching worryingly to the right as the Tories pander to UKIP. They are against Scotland leaving the Union but happy to take us out of Europe.
They are intent on privatising the NHS and are destroying education in England and I want no part of that.
I also do not want to be part of a country which persecutes the disabled and the most vulnerable in society and has no qualms about the use of food banks.
Labour have been no better in recent years and Milliband does not have a snowball's chance in Hell of getting elected.
I am sure many friends and readers in England feel the same but we have a once in a lifetime chance to move towards a fairer and more just society and we have to take it.
The fact that we have been ignored by the Establishment until the last few days  when they finally realised what was happening 500 miles from Westminster, the scaremongering and outrageous bullying and intimidation over the last few days and the bias of the supposedly impartial BBC have only served to help me justify my decision.
Lord Dannatt, the former head of the British Army, and apparently a committed Christian's comments that Scottish independence would let down the families of dead Scottish soldiers was perhaps the lowest of many low comments.

King Creosote - Something To Believe In
Posted by Charity Chic at 08:00