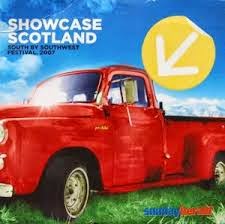 We stay in Scotland for this week's Saturday Lucky Dip. Sorry but there is no escape!
The featured CD Showcase Scotland - South by Southwest Festival 2007 came free with the Sunday Herald Newspaper and contains an impressive 15 tracks.
Emma Pollock,The Hedrons, The Hazy Janes and wee Paolo have all featured before on CCM and have therefore been excluded from selection.
Similarly The Twilight Sad and The Fratellis are pretty well known and may well feature at a later stage.
So it is a case of selecting two of the remaining nine for your listening pleasure
Jo Mango is a folk and acoustic band from Glasgow and is also the adopted name of the lead singer.
Here on the single My Lung I think she may well be on a solo mission and her appearance at SXSW was as a solo artist
The Draymin are a band that hail from a hut in Rosyth in Fife.
At the time they were unsigned. I haven't been able to find out very much about them other than they sold out the 900 capacity Dunfermline Velocity in 2009 and supported local legends The Skids in Dunfermline's Glen Pavilion for a couple of gigs in July 2007