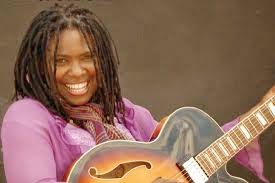 Ruthie Foster was one of the first artists ever to appear on CCM way back in December 2012 and I thought it time to feature her again now that the blog attracts a slightly wider audience than it did in it's infancy.
I  took down The Phenomenal Ruthie Foster, her 2007 album on the Blue Corn label from Houston, from the shelves the other day primarily because I wanted to check the spelling of  the word phenomenal which I was using in another post.
This led me to giving it a listen and subsequently sharing it with you.
She used to work in the US Navy which is where she started performing and this was her fifth of nine albums to date.I also have her 2002 album Runaway Soul also on Blue Corn.
Again we could debate whether she is blues,folk, soul or gospel and indeed she appears to have won a number of awards as a blues artist.
Whatever.
Featured here are Mama Said one of her own compositions and Up Above My Head (I Hear Music in the Air) a cover of the terrific Sister Rosetta Tharpe song treading firmly on George's Gospel Sunday toes!

Ruthie Foster - Up Above my Head (I Hear Music in the Air)
Posted by Charity Chic at 08:00