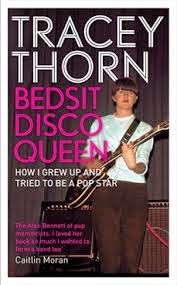 I am currently reading Bedsit Disco Queen by Tracey Thorn.
It is well written and an interesting read as you would expect from someone with a first in English literature.
She is obviously mostly famous for her work with partner Ben Watt in Everything But The Girl.
They are not a band I have anything on apart from their Covers EP from 1982.
After a few quirky indie albums they seemed to change direction with a cover of Rod Stewart's I Don't Want to Talk About It which became their biggest hit and led to this follow up EP.
She has also done solo stuff and collaborations with the likes of The Style Council (Paris Match on Cafe Bleu), The Go-Betweens (she was best pals with their drummer Lindy Morrison) and Massive Attack.

I am quite intrigued as to references to her earlier work with the all girl band The Marine Girls with two albums Beach Party from 1981 and Lazy Ways from 1983. If anyone has any gen on them I would be glad to here  it.

Everything But The Girl - Time After Time

Everything But The Girl - Alison
Posted by Charity Chic at 08:00