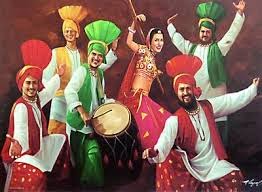 I recently acquired The Rough Guide to Bhangra- One Way Ticket to British Asia and very good it is too
It is from 1990 and the sleevenotes point out that since the mid 80s when bhangra was a traditional folk music from the Punjab it has migrated to western Europe to be mixed with the likes of house,disco,hip-hop,swing,reggae, drum'n'bass and UK garage.
So like the British population a rich melting pot of cultures and inspirations.
The first song is from Alaap and is written by lead-singer Channi who is dubbed as the "James Brown of bhangra"(take it to the bridge Channi!)This song was the first hit bhangra single in Britain with Alaap being the first bhangra group to release an album in the UK with Teri Chunni De Sitare
Bally Sagoo may be familiar to some of you and indeed he has featured on CCM before . Here he joins forces with vocalist Rama to provide some reggae and ragga- influenced bhangra or "bhangramuffin" which went on to become a trend for a few years.
Fabulous stuff

Off up north for a couple of weeks  tomorrow and don't have the time or  the inclination to leave you with a daily post whilst I am away. However there are a few posts scheduled hither and dither to keep you going until I return