When the Pointer Sisters Were Country 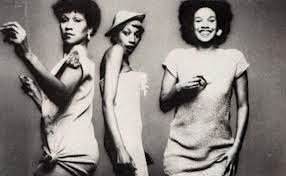 Fairly recently I purchased Black & White the 1981 album by June, Anita and Ruth more commonly known by their collective name of The Pointer Sisters
It is a pleasant album full  of lite soul/disco and includes Slow Hand one of their two most famous songs along with Jump (For My Love)
However it wasn't the first Pointer Sisters music in my collection. Oh no1
They feature on the fabulous Trikon album Dirty Laundry - The Soul of a Black Country with their 1974 song Fairy Tale.
It is not commonly known but they started of by trying different genres including country. They were a quartet at that time with sister Bonnie in tow.
Not only did Fairy Tale, written by Anita and Bonnie, win them their first Grammy in 1974 it led them to be invited to play on the Grand Ole Opry.
High praise indeed.