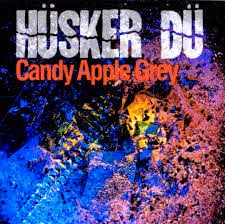 It has all been pleasantly mellow on CCM recently.
So it is time to notch the tempo up somewhat by featuring Candy Apple Grey from the legends that were Hüsker Dü
From 1986 it was the fifth of the the six studio albums they were to produce during their career and the first on a major label Warner Brothers.
It was their first album to trouble The Billboard 200 reaching the dizzy heights of #140.
Unbelievable - it is now quite rightly recognised as a classic (in this household at least)
Hüsker Dü were from St Paul, Minneapolis and consisted of Bob Mould on guitars,vocals, keyboards and percussion, Greg Norton on bass and Grant Hart on drums, vocals,keyboards and percussion.
Six of the songs on the album were written by Bob Mould and four by Grant Hart
The two I have selected are by Grant Hart.
All three members are still actively involved in the music career having been involved in bands  (most notably Bob Mould in Sugar) and in pursuing solo careers.

Husker Du - Don't Want to Know if you are Lonely